The Down Under: Travels in a Sunburned Country by Bill Bryson

Book Review: The Down Under: Travels in a Sunburned Country by Bill Bryson

I had heard a lot about Bill Bryson’s writing and always wanted to pick it up. But some or the other book kept me away from it. Those of you who aren’t familiar with Bryson, he is known for showing a country in his unique way. Think of history meets comedy meets cynicism. The best part, though is his writing, is astonishingly affectionate and delightfully breezy. After reading, some information-laden books like – Homo Sapiens, History of Jerusalem and Contagious- I decided to read a “fun” book. Bill Bryson’s name came to me, and I picked up one of his books. Here is my book review on The Down Under: Travels in a Sunburned Country by Bill Bryson.

Most travelogues tell a story linearly. Stating out what led the authors to take on the journey, essential events, learning through the journey. The Down Under by Bill Bryson, however, chooses a different path. Bill, takes us through all the regions of Australia which he affectionately categorised as – the outback, civilised Australia and around the edge. He travelled to all of these regions at different points in time. This book is a compilation of his wacky encounters and hilarious anecdotes in this one book.

Through the book, Bill touches upon the historical facts of everything in Australia. Starting with the troubles of “discovering” this land, with a great many voyagers only having to either miss it or not knowing they found it in the first place! To how Captain Cook discovered Australia’s lush expanse and claimed the east coast for Great Britain. Only to find out later that he took Australia’s wet season for its dry one! In fact, the point where Circular Quay now stands is precisely where Cook anchored his ship back in 26, January 1788- date now recognised as the Australia Day.

Bryson keeps dropping background information on everything of importance. Some interesting ones like how the Australian Prime Minister, Harold Holt, went missing and the mystery behind it. To some rather wacky ones, like Australia’s love for big things! What started with a big Banana placed to catch the attention of passersby to visit the amusement park. Now you will find big lobsters, big guitar and even a big Ned Kelly! So much so that tourist flock to “see” all the big things that Australia has to offer.

“No one knows, incidentally, why Australia’s spiders are so extravagantly toxic; capturing small insects and injecting them with enough poison to drop a horse would appear to be the most literal case of overkill. Still, it does mean that everyone gives them lots of space.” Bill Bryson

One thing that stands out across the book is Australia’s flora and fauna. No, not just the fact that it is so diverse. But the fact that everything is deadly in Australia. Bryson doesn’t miss a chance to share an anecdote about the nasty fauna and flora of Australia. It starts with sociopathic jellyfish, deadly spiders in the toilet, homicidal crocodiles and even murderous rip currents! The Down Under is filled with hair raising hilarity. Bill Bryson puts himself in some of the most distressing situations. Which most Australians dismiss by calling these situations “uncomfortable.” Ultimately Bill concludes that Australians are so surrounded with the danger that they have evolved an entirely new vocabulary to deal with it.

“This is a country that is at once staggeringly empty and yet packed with stuff. Interesting stuff, ancient stuff, stuff not readily explained. Stuff yet to be found. Trust me, this is an interesting place.” – Bill Bryson

Apart from the nasty encounters and the ever so fun anecdotes. Bill does a phenomenal job of describing life in Australia and the Australian landscape. At first, he is perplexed by the Australia Day celebration in Adelaide – large family groups gathered in the park playing cricket and picnicking. He wondered why would everyone want to crowd in one small park when they are blessed with such vastness? But soon concludes perhaps its the intimidating emptiness of the country that makes Australians rather social creatures. While, ever so beautifully, describing the view from Cheviot Hill, Bill says, “All I could see through the drifting soup were some vague outlines of rocks and an indeterminate expanse of sand. Only the sounds of unseen waves flopping onto an unseen shore made it evident I found the sea”. A description so clear, its as if you are experiencing it all with Bill.

All in all The Down Under: Travels in a Sunburned Country by Bill Bryson intersperses everything you need to know about Australia. Along with bizarre facts and hilarious accounts with natives/fellow travellers. This book is equally appealing for someone planning to visit Australia as it is for those who have already been there (survived that).

If you are looking for your next read, I say pick this marvellous book up! Liked this book review on The Down Under: Travels in a Sunburned Country by Bill Bryson? Then do check out my review on Xanadu: A Quest by William Dalrymple.

Pin the book review on The Down Under: Travels Through a Sunburned Country 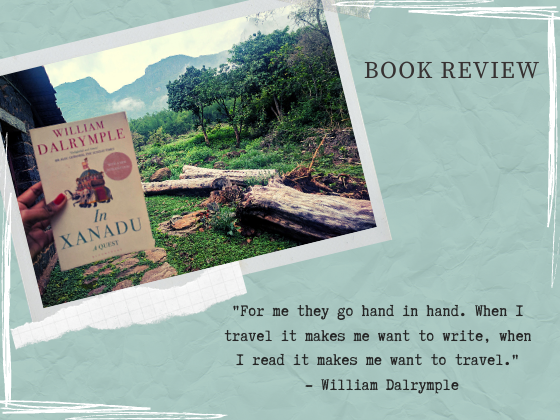